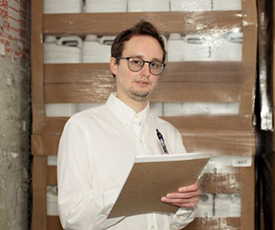 John graduated from Clinch County High School in 2014. He was involved 4 years in his school’s 2-Act Play, with major speaking roles each year. He also learned other parts so he could “coach” others when they would forget lines. After graduation John and his mother (Layne) opened a coffee shop where John was a barista. Unfortunately August 17, 2018 the coffee shop was destroyed by a gas explosion (there were no fatalities but 3 girls sustained major burns). John now works with his mother in her flower and gift shop with delivery responsibilities. His main hobby is movies, all genre and periods.  He has quite the collection of 3,000+. John aspires to be a screenwriter as he has started his first, Pet Dick (as in detective).