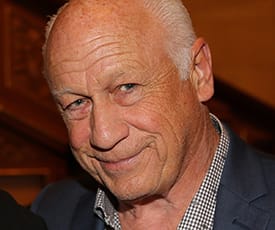 Born into a show business family, Joey began his career as a performer in 1978 as a recording artist with Casablanca Records and starring in the feature film, Sunnyside (1979). Joey has directed and produced over 20 films, including the critically acclaimed Enemies of Laughter (2000). In 2005, Joey produced the documentary Normal People Scare Me while mentoring a fifteen year old boy with autism who directed the film. Inspired by that experience, Joey developed the curriculum for Inclusion Films, a program that has served hundreds of aspiring filmmakers.

Before he made it on the big screen, Joey worked as a special education teacher in New Jersey.

Joey Travolta in the
Behind the Scenes of the Delivering Jobs PSA: